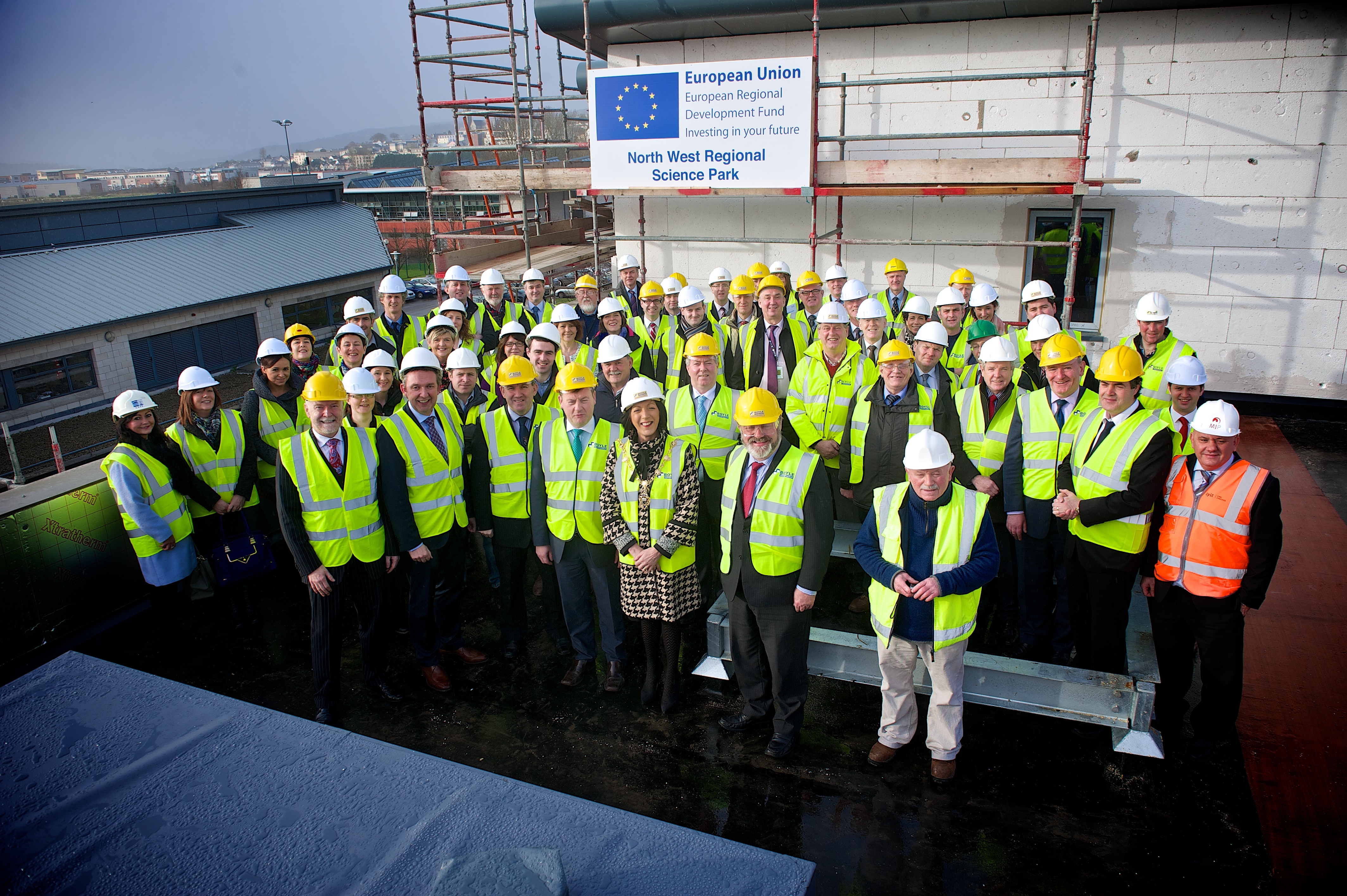 It was an historic day at Letterkenny Institute of Technology (LYIT) on Friday past at the Topping Out ceremony of the North West Regional Science Park project. This marks another positive step in terms of the development of Innovation Centres in Ireland’s Higher Education campuses with LYIT’s Business Innovation Centre opening over 25 years ago. A further upgrade in 2000 resulted in the Business Development Centre, while 2010 saw the opening of the current CoLab, with support from Enterprise Ireland and the Department of Education and Skills. This centre, which is full to capacity, now houses 28 start-up companies employing over 100 graduate-level employees.

Speaking at the topping out ceremony, Lorraine McCourt, Director with the SEUPB, said: “We are delighted to see that construction is at this advanced stage. The project is one of the largest economic development initiatives supported under the current INTERREG Programme and will make a positive and long-term impact upon the economic fortunes of the North West. I look forward to hearing more about its successes and the many different businesses it will support over the coming years.”

The NWRSP is a shot in the arm for businesses within the North West, not just for the small companies in their infancy but also for those established companies and multinationals who can both contribute to and benefit from the dynamics of the Science Park project. LYIT has 3,500 students, and is committed to providing opportunities for its graduates within the North-West Region, preparing them for their lives ahead. The emergence of the Science Park on LYIT’s campus at this critical time makes this job a lot easier. This is LYIT delivering on its engagement agenda and showing leadership in the region. This is done in a collaborative manner with all relevant stakeholders.

The North West Regional Science Park (NWRSP) project is delivered through an innovative Cross Border partnership between LYIT and Northern Ireland Science Park (NISP), led by the North West Region Cross Border Group (NWRCBG). It is supported by the European Union’s INTERREG IVA Programme, which is managed by the Special EU Programmes Body (SEUPB). The NWRSP will allow the world renowned Science Park brand, operating model, and support programmes be brought to the North West at Fort George in Derry and at the CoLab at LYIT. This NWRSP project creates the first third generation Science Park in the Republic of Ireland, which is the first step to creating an All-Ireland Association of Science Parks and will further assist LYIT in building a regional innovation ecosystem turning knowledge into enterprise and building a new economy in Ireland’s North West.

The “topping out’’ ceremony marks the culmination of almost four years’ hard work on behalf of all the stakeholders in bringing this project from concept to a reality. NWRSP is a physical manifestation of what positive cross-border engagement can deliver; bringing together stakeholders on both sides of the border to deliver a tangible output in both Derry and Letterkenny for the benefit of the people who live here.

A very positive working relationship has developed among the various stakeholders: Donegal County Council, Donegal Local Enterprise Office, Department of Jobs, Enterprise and Innovation, Department of Finance and Personnel (NI) and Department for Social Development (NI), EI, IDA, Údarás na Gaeltachta, ILEX, NWRCBG and NISP, the design team led by Hamilton Architects and the contractors led by Boyle Construction. With the support of the funders, through SEUPB, all combine to make a hugely positive statement on behalf of the North-West region and indeed pave the way for future collaborative regional partnerships.

These two Science Parks represent a total investment of €15m in the North West, with the provision of facilities in both Derry City and Letterkenny. The project is coordinated by the North West Region Cross Border Group, a partnership working together to develop the North West Region, comprising the five Councils of Derry, Donegal, Limavady, Strabane and Magherafelt.

If any business would like to learn more about availing of space at the North West Regional Science Park please contact Patsy Donaghy, Co-Lab Manager, on 074 9186703 or patrick.donaghy@lyit.ie.

The North West Regional Science Park is a collaborative cross-border project comprising the Northern Ireland Science Park, Letterkenny Institute of Technology, and the North West Region Cross Border Group. Funding is provided under the European Union’s INTERREG IVA Programme managed by the Special EU Programmes Body, with match-funding from the Department of Finance and Personnel in Northern Ireland and the Department of Jobs, Enterprise and Innovation in Ireland. Further funding is provided by the Department for Social Development.

The Special EU Programmes Body is a North/South Implementation Body sponsored by the Department of Finance and Personnel in Northern Ireland and the Department of Finance in Ireland. It is responsible for managing two EU structural funds Programmes PEACE III and INTERREG IV designed to enhance cross-border co-operation, promote reconciliation and create a more peaceful and prosperous society. The Programmes operate within a clearly defined area including Northern Ireland, the Border Region of Ireland and Western Scotland.

The INTERREG IVA Programme, funded under the European Regional Development Fund (ERDF), is worth €256 million and aims to address the economic and social problems which result from the existence of borders. It has two distinct priority measures to create co-operation for a more prosperous and sustainable cross-border region.

For more information on the SEUPB please visit www.seupb.eu. 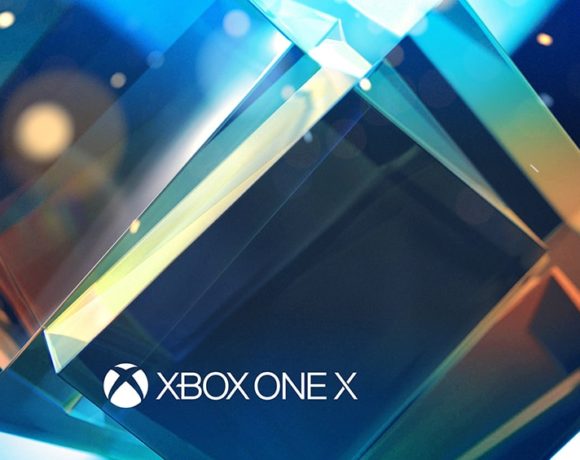 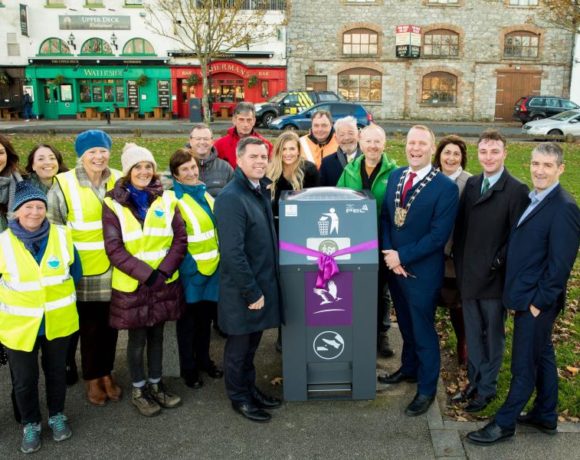 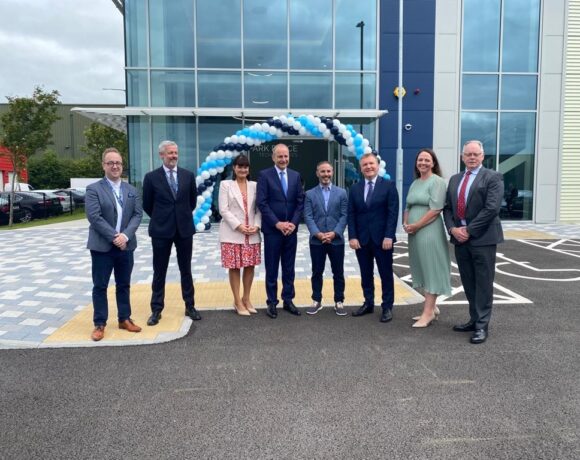